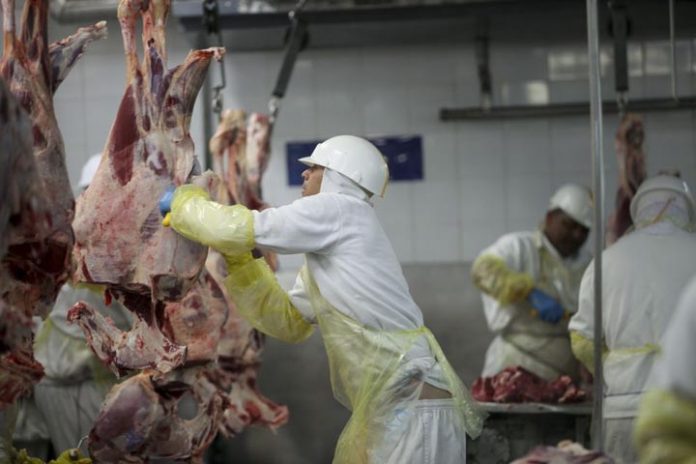 São Paulo, Brazil—The Brazillian Animal Protein Association (ABPA) is urging Manila to fast-track the investigation into the contamination of some meat shipments with salmonella to the Philippines in July.

ABPA Vice President and Technical Director Rui Vargas made the appeal after the Philippine mission that would inspect some meat establishments in Brasilia last week was postponed due to the discovery of avian influenza (AI) in some towns of Central Luzon.

“The audit of the Philippines is important because more than 30 listed Brazilian establishments export to them. And we had a document from the Philippines this year notifying us of our problems at five exporting establishments in a range of companies that we think are noble,” Vargas told the BusinessMirror in an interview here.

“We are now awaiting and expecting that, by end of September, there should be a visit by the Philippine mission. It is still being confirmed,” Vargas added.

Vargas said they find the Philippine government’s action in addressing the issue with Brazil and salmonella somewhat “slow”.

“They told us they postponed because it has to be necessary to be quarantined because they came from avian influenza [AI] problem, and we have a restrictive rules here on AI. We do not allow entry for people who visited establishments with poultry in the last 15 days,” he said.

“I am not satisfied on the rate they are addressing this. I find it a little bit slow, but we accept it because it is reasonable,” he added.

The ABPA official noted that the Philippines’s zero tolerance on salmonella policy is  “unreasonable”, as the bacteria could be easily killed through thorough cooking or processing of meat.

Despite these remarks, Vargas added they would do their best to comply with the importation policies of their trading partners, even if they are too stringent in nature. Vargas said that countries such as South Korea, South Africa and some European countries also impose zero tolerance on raw meat.

“I think the country who is going to buy our products can set up whatever policies they want to guarantee that their people are safe. If the Philippines feels that it’s good to contain this kind of situation [through zero tolerance] then we will try to follow, to comply,” he added. “But the Philippine government must understand that we have control here. We know exactly what we are doing in terms of controlling salmonella—we will never send products that have salmonella problems.”

Vargas said they are confident that the Brazil-based meat-packing plants exporting to Manila will pass the inspection to be conducted by the Philippine government.

“We will answer all the questions of the Philippine government. We are not afraid of this because we have a good system, and we just have to show them that we have a strong system of production,” he added, “because if we really have problems, then we ourselves will take precaution before things get much worse and could cause more problem with our production. In Brazil, we work with truth, transparency and prevention,” he said.

On August 7 the Department of Agriculture (DA) temporarily suspended the accreditation of all Brazilian meat establishments to export meat products to the Philippines, after some shipments from the Latin American country tested positive for salmonella.

“A total of 246 out of 492 container vans were sampled and subjected to laboratory analysis from March 1 to June 30 wherein samples from 18 containers [7 percent] tested positive for salmonella spp.” he added.

Piñol noted that under Republic Act 10611, or the Food Safety Act of 2013, the DA is responsible for the development and enforcement of food-safety standards and regulations for food in the primary production and postharvest stages of the food-supply chain.

“[The DA] shall monitor and ensure that the relevant requirements of the law are complied with by farmers, fishermen and food-business operations,” MO 32 read.

Piñol said the temporary suspension of the accreditation of all Brazilian FMEs will remain place, pending the results of an investigation to be conducted by the DA.

The government has already suspended the processing, evaluation of the application and issuance of sanitary and phytosanitary (SPS) import clearance for meat from Brazil and canceled the SPS import clearance of meat products that have not left Brazil.

“Shipments of meat in transit upon the issuance of this order will be allowed to enter subject to 100-percent physical and laboratory examination inspection,” MO 32 read.

Based on the list available on the National Meat Inspection Service web site as of September 16, 2016, there are about 57 accredited Brazil-based FMEs allowed to export meat and meat products to the Philippines.

However, the document showed that the validity of the accreditation of all 56 FMEs in Brazil are “for revalidation”.

Earlier Agriculture Assistant Secretary for Livestock Enrico P. Garzon Jr. said 10 DA personnel will be sent to Brazil to conduct the inspection in some 25 FMEs in Brazil. Garzon added the DA will lift the export ban on meat-packing plants that will be cleared by the inspectors.

Meat Importers and Traders Association President Jesus C. Cham urged the government to expedite its investigation, as any delays in the process could result in higher meat prices.

“To minimize the impact, we urge [the] DA to inspect the plants expeditiously, at the same time adhering to the standards of the international Codex Alimentarius Commission, of which the Philippines is a member,” Cham told the BusinessMirror in an earlier interview.

Data from ABPA showed that Brasilia’s chicken-meat exports to Manila from January to July 2017 expanded by 35 percent to 32,339 MT, from the 23,954-MT recorded volume at the same time period last year.

The ABPA is the biggest animal-protein chain association in Brazil comprised of 147 member-companies, among which are producers and exporters of poultry meat, pork, eggs, genetics and equipment, as well as state-level entities and other associations. The ABPA’s estimated annual meat- exports revenue is pegged at $8 billion.