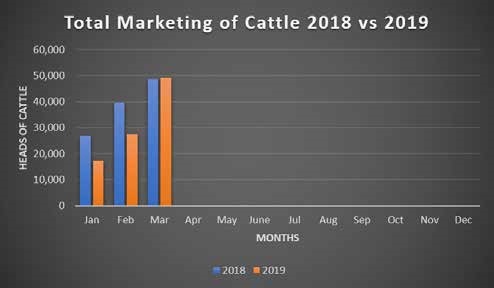 Livestock prices fell drastically, while the Agri-inflation rate increased substantially during the first quarter of 2019 as farmers are reeling from yet another drought which negatively affected both cattle and sheep prices, as well as fodder production and fodder prices.

Using the Production Cost Index base of 2017, the Agri-inflation rate increased by 4.4 percent year-on-year during the first quarter.

Comparing the 2018-quarter 1 (Q1) prices to that of 2019-Q1, cattle prices dropped by 10.3 percent, while the agricultural production expenses increased. A decrease in the total weighted cattle prices, over the past 12 months was primarily due to a 22.6 percent drop-in weaner prices, while slaughter prices increased by 14.7 percent. The increase in slaughter prices resulted from Meatco keeping their prices stable for the past months despite a drop in other livestock prices. Sheep prices increased slightly by about 1.4 percent.

Evidently, producers continue to pay more for a basket of inputs used than what they receive for their output. For over 13 years of monitoring, the price-cost squeeze of cattle is estimated at 4.0 percent per annum, and for sheep at 0.7 percent per annum. Besides recurring droughts, on-farm expenses continue to have a significant impact on producer profits.
“Livestock mortality rates are increasing and the current grazing condition is threatening the livestock industry. To reduce pressure on the limited grazing and to prevent financial losses farmers are destocking,” she notes.

She says for the first quarter of 2019 and based on Meat Board’s statistics, 63 067 live cattle were exported to South Africa, 219 were exported to Angola and 131 to other countries. Export abattoirs slaughtered about 21 494 units of cattle. Sheep export abattoirs received a throughput of about 53 851 heads of sheep and 104 196 live sheep were exported.
Of the total live sheep exported, 40.3 percent were slaughter sheep, 11.4 percent were fat -tailed sheep , and a remarkable 48.3 percent were too lean –too small sheep that increased due to insufficient pasture and drought conditions.