As ‘scary’ swine fever spreads, you may pay more for your meat

Home / BUTCHER'S BLOG / As ‘scary’ swine fever spreads, you may pay more for your meat 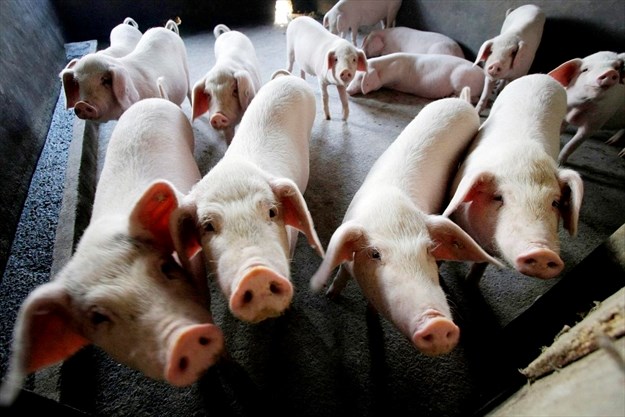 The slaughter of as many as 200 million hogs in China. A border fence erected between Germany and Denmark. Pig carcases washing up on a beach in Taiwan. The first report of pig deaths in South Africa. Infected wild boars in Poland.

We haven’t been paying sharp attention to the African swine fever epidemic, which surprises Al Mussell, head of research at Agri-Food Economic Systems in Guelph. “I’m a little bit shocked,” he says. “I don’t think people have come around to what this could mean.”

We’re starting to. Last week, the U.S. Department of Agriculture released statistics for U.S. pork exports. In a single week an unprecedented 77,000 tonnes of pork were exported to China, a vast draw on U.S. production as China looks to replace pork production shortfalls. In an entire year, Mussell says, U.S. exports to China commonly fall between 100,000 and 200,000 tonnes.

“The spread of African swine fever is scary,” Mussell continues, noting the march of the disease from first reports in China’s eastern Jiangsu province in August to last week’s report of an outbreak in China’s northwestern reaches. The disease has now been reported in all of China’s provinces. “They got it in China, then Vietnam got it, then Cambodia got it, now it’s in Tibet,” continues Musell. “Yesterday they announced it’s in South Africa.”

So market equilibrium and global trade patterns are shifting deeply beyond the revocation of permits to export Canadian canola to China. Last week, Rabobank, a Dutch-based leader in agriculture and food financing, released a research note equating the swine fever in China to a 30 per cent loss in Chinese pork production, equivalent to Europe’s entire annual pork supply. Swine fever, the bank reports, is reshaping the global industry.

In the short term, that should prove a boon to Canadian pork producers. Canada is the world’s third largest pork exporting country, measured both by value and volume, and China is already in the top three markets for Canadian production, along with Japan and the U.S.

But in agriculture, nothing is short-term and the interwoven nature of the industry is often more complex that outsiders imagine.

Mussell holds a doctorate in agricultural economics from the University of Minnesota (he was a Fulbright scholar). So don’t be surprised when he starts talking about the failure of the Soviet wheat crop in 1972, which led to what became known as the Great Grain Robbery when the Soviets bought up 25 per cent of the U.S. wheat harvest. The New York Times recounted how Soviet buyers welcomed U.S. grain dealers to their suite at the New York Hilton that summer. “They bought our grain like you’d buy a used car,” a representative from Cargill told the Times.

“What happened was you got this astonishing spike led by wheat,” Mussell says. “So goes wheat, so goes corn and ultimately the whole grain complex went absolutely bananas.”

Domestic prices shot up by 50 per cent.

“I’m going to say we’re looking at the same sort of thing, this time led by meat,” Mussell continues. With a difference. “With wheat, if you’ve got a failure this year you’ll just grow more wheat next year, right? … When you’ve got that kind of a hole blown in the global meat supply, because this is driven by livestock, this is not something that can be turned around in a 12-month time frame.”

The upshot: “We could be in a position where we have exceptionally high meat prices.”

The Rabobank research note concluded that losses of pork production in China, even after larger imports, will result in a net supply gap of almost 10 million tonnes. Going forward, “China’s herd-building will be slow and take years.” Herd losses elsewhere in Southeast Asia are expected to be “sizable … and will exacerbate global protein shortfalls.” And fears are understandably heightened in Europe. “The potential for outbreaks to restrict exports from significant pork-producing countries, such as Germany, cannot be ruled out.”

“I’m seeing this as a massive game changer and it could last years,” Mussell says.

He wonders if producers might be looking to invest in a hedge against this. Non-meat proteins would be obvious, but I’ve written enough about non-meat proteins.

And Mussell could be wrong. “One of the problems in the work that I do is trying to keep track of all the moving parts and the interconnections among them in this strange environment that’s developed in the last 12 months.”

We won’t even talk about what would happen if the swine fever landed here. That would be a disaster.